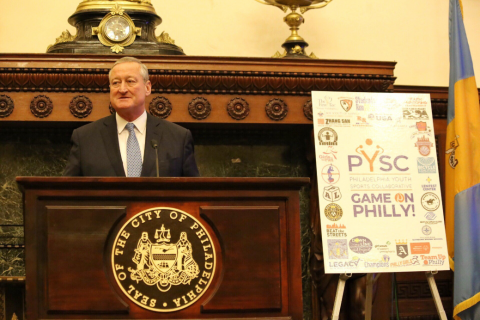 On June 27th PYSC stood with Mayor Kenney to announce the Game On Philly! campaign aimed to create quality sports-based youth development programs accessible to all of Philadelphia’s young people.

The full room included representatives of the Mayor’s Office of Education, Philadelphia Parks and Recreation, foundations, and professional sports teams among other stakeholders. 28 of PYSC’s member organizations were present, and several were accompanied by student athletes who participate in their programs. Judelly Sanchez is one of these students, who spoke about her experience in the Heart & Sole program through Girls On The Run, Philadelphia. Judelly was caught in cross fire in her neighborhood and to this day has bullets in her leg. This left her with lasting trauma and she was fearful in her own neighborhood and home. With the support of a trained and dedicated coach Judelly found security and friends with Girls On The Run, and accomplished something she thought would be impossible: completing a 5k race.

Every child deserves the chance to play and grow through sports. You can help create opportunities for Philadelphia’s young people by visiting GameOnPhilly.com

The Collaborative Partners with the Office of Children and Families to Provide Sports Equipment, Curriculum, and Coach Training for Youth Summer Programming