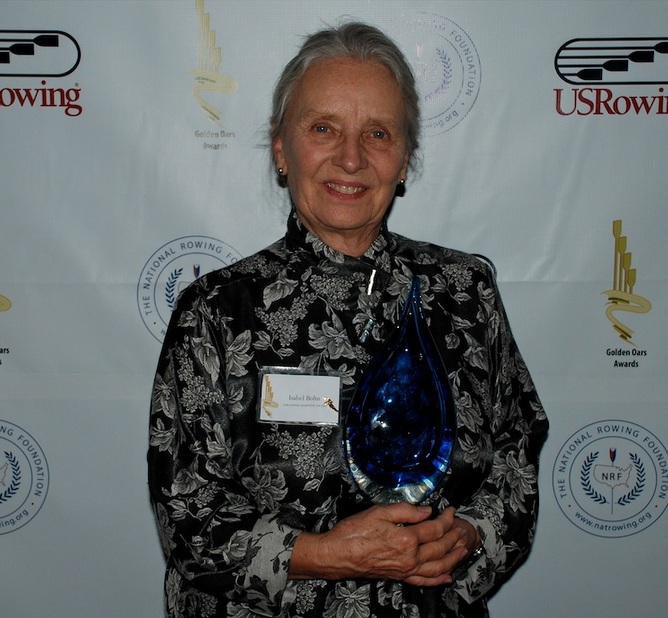 To celebrate this historical anniversary, the Collaborative will continue to highlight the significant contributions of Philadelphia women who have left their mark on the sports world and in the lives of many. This month’s feature is Isabel Bohn, founder and executive director of the Pennsylvania Center for Adapted Sports.

Growing up in Germany as a child, Bohn survived a streetcar collision at age 11 that required the amputation of her left leg above the knee and several fingers on her left hand. Although Bohn had physical limitations, it was her grade school physical education teacher who integrated her with the other students playing sports that made her realize that if she could participate in sport, she could do anything.

Though active as a child, it wasn’t until age 42 that Bohn began playing sports again. She joined a skiing clinic in Vermont with other amputees and her love for the sport grew. When asked how she got involved in adaptive rowing, she recalled meeting a couple of guys from Philadelphia at the ski clinic. “They called me over and said, ‘Hey, you live in Philly, would you want to start rowing with us?'” she said. “So I started rowing, and I loved it. I guess you can say I was recruited.”

That was in 1981 and soon after, Bohn helped form the first all-adaptive rowing club, Philadelphia Rowing Program for the Disabled (PRPD) now Philadelphia Adaptive Rowing (PAR). PAR later became a program of the Pennsylvania Center for Adapted Sports (PCAS), a non-profit organization founded by Bohn and Jeff Mcginnis in 1995 that provided adapted sport and recreation programs for people with disabilities including rowing, cycling, skiing, climbing, kayaking, and ice hockey.

Bohn later became a member of the commission that oversees international rowing (FISA) and fought for the inclusion of adaptive rowing as a Paralympic sport. She recruited the first adaptive team that represented the United States in 2002 in the world championships in Seville, Spain. “I’m very proud because I was very involved in that,” she said. “Once we got FISA behind it, they got national associations from other countries involved.”

Along with her contribution to the adaptive rowing community, Bohn has achieved significant athletic milestones herself. Winner of the Louis Braille Award in 2004, she was the first adaptive participant in Philadelphia’s Dad Vail Regatta and the first adaptive competitor at a World Rowing Championships. In 2011, US Rowing introduced the Isabel Bohn Award in honor of Bohn to recognize a member of the rowing community in the US each year who has demonstrated achievement in adaptive rowing.

Bohn no longer rows and has given up her seat on the FISA commission, but her work is far from complete. She envisions more access and development of better sports and recreation programs for people with disabilities, geared to maximize the health and exercise benefits of physical activity.